always at home, forever on the way 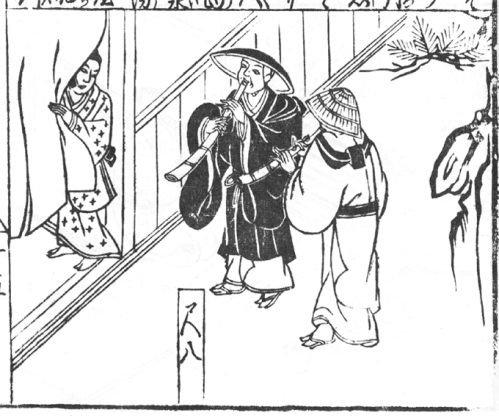 What is interesting in this drawing is that the two shakuhachi players are an ordained Zen Monk — an unsui  — on the left, and a Komuso on the right. The Komuso remained for the most part a lay order, which is why their robes are white and they don’t wear the kesa that a monk would wear, but a variant closer to the rakusu that can be worn by the laity. Later on in the history of the Fuke-Shu when they had their own temples and priests there must have been some type of ordination, but the details of temple operations within the Fuke-shu are minimal at best (at least in translation). So to see in this case that if one was ordained and practicing takuhatsu with the shakuhachi, one sticks with the traditional monks garb, including the wide flat hat used traditionally by monks for takuhatsu.